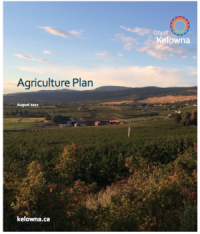 In 2017, the City of Kelowna recently went through the process of updating their agriculture plan, and it was endorsed by City Council summer 2017.

Agriculture is very important for the City of Kelowna, 55% of the land base in Kelowna is zoned for agriculture use!   Supporting the local food system helps contribute to the health of our community members by increasing access to fruits and vegetables.

A recent opinion story on CBC brings attention to how there is a link between free trade, the global food system and our health.  “The increase in available calories after the first Canada-U.S. free trade agreement was estimated to be enough for some Canadians to gain as much as 27 pounds”.

Climate change is also something else to think about when we talk about our local food system. Food self-sufficiency is increasingly important as extreme weather will affect production in California, which is currently where 40%–50% of BC’s supply of fruits and vegetables comes from

For the development of the City of Kelowna’s Agriculture Plan, the Central Okanagan Food Policy Council acted as a stakeholder and attended a number of stakeholder sessions.  We also held an engagement session with our members to gather feedback and submitted a written response to the City.

The plan is a great success for agriculture in Kelowna!  It highlights policy and action needed to protect farmland, support new farmers, and get land into production.  It’s also great to see that the City of Kelowna is putting resources into implementing the plan!  City staff recently held a consultation for a few policies flagged as important to implement right away.

House size on agricultural land has been an issue and one of the proposed policies will attempt to regulate the size.  The Ministry of Agriculture guidelines suggest a maximum floor area of 500 meters squared for a principal residence.  The City would like to set the maximum house size to align with the Ministry’s suggested floor area.

While the COFPC recognizes that farmers do don’t want to be limited in how big they can have their house, many of the large houses being built may not be by farmers.  Very large houses on farmland increases the value of the land and makes it almost impossible for new farmers to buy their own land.  Farmland should be for farming, not for building mansions.

Looking at what the proposed maximum house size is, 500 square meters (5300 square feet), that seems like a pretty big house if you ask me!