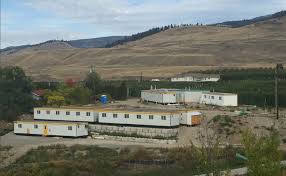 The local governments the Central Okanagan now recognize the COFPC as a key player in food system policy and planning!  This is very exciting for us as being able to influence policy at a regional level helps shapes a food system that best support our community members.

While many farmers in the Central Okanagan do provide good housing for their temporary farm workers, there are some that do not.  Often times, the houses do not have enough kitchen space for all the workers living in the housing.  Some workers may skip meals because of this.  Also, farmers do not need to stock the kitchens with pots, pans, dishes and other things that are essential to cook a healthy meal.  Furniture, television, radios and internet are also not required so temporary farm workers might be living in a house without a comfortable place to sit and relax.

Looking at the bigger picture of our food system, we strive to have resiliency.  A resilient food system is one capable of bouncing back from adversity. Built-in redundancy is a given in a resilient food system. Redundancy requires a necessary amount of replication, which from a strictly economic standpoint, appears to be inefficient. Why raise pigs locally when pork can be purchased at a lower cost from elsewhere? Why grow apples when they can be imported cheaply and cherries can be grown and exported for higher profit? Why hire local labour when temporary farm workers will work for lower wages? Unfortunately having profitability as the main driver in agriculture decision-making can reduce food system resilience.

Our farmers are aging, in 2011 61% of farmers in BC were over the age of 55. There has been a lack of farm family succession which has contributed to the reliance on temporary farm workers to do much of the heavy lifting in farming. The temporary farm worker program has become both the solution and one of the problems with respect to loss of intergenerational transfer of farming skills.

There will likely always be a need for food imports even if all provincial ALR lands were used to growing food for local consumption. However, there is still a great deal of untapped potential in the local food system. This includes potential for job creation, social innovation, community-building, and improved soil, water, and air conditions.

Overall, the topic of temporary farm workers is very complex and there is a lot to think about!