The “Lady At The Grocery Store” Method Of Making Yogurt 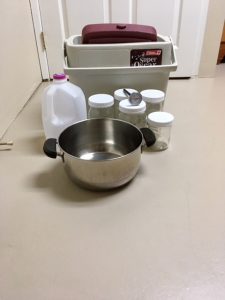 I eat a lot of yogurt. My husband would call that an understatement. When our kids were still living at home the amount of money that we spent buying yogurt each month could have paid the lease on an econo car. That was before Greek Yogurt came on the scene. Therefore, you can imagine my joy when I learned how to make large quantities of yogurt with a minimum of time, effort, and expense.

It all began at the grocery store. I normally do not pay attention to what other people have in their grocery carts. I could not care less. However, on this day the magazine headlines in the cashier’s line-up were of no interest to me. My mind can only occupy itself for about five seconds before it starts looking for something to latch onto. In front of me was a woman who had seven or eight gallons of whole milk in her cart. Hard for a restless mind to not notice. I tapped the woman on the shoulder and asked if she ran an orphanage or perhaps had a few sets of triplets at home. The woman informed me that she used the milk to make yogurt for her (apparently large) family and in the space of two minutes or less she explained how to do it.

I have tried many ways to make yogurt over the years some of which involved purchasing equipment that made individual servings of 250 mls or less. This was useless to me. However, with the “Lady at the Grocery Store” method I could make a full gallon of yogurt (or more) at a time. In this blog post I am sharing with you the yogurt recipe that has saved me hundreds if not thousands of dollars over the years:

If you want to flavour your yogurt then do so when you are about to eat it. One time I tried adding maple syrup before incubating a batch. Bad idea. The syrup fermented and the result was an inedible cross between mead (honey wine) and sour milk.

TIPS THAT I LEARNED THROUGH EXPERIENCE:

This post is dedicated to the lady at the grocery store. Thank-you so much.